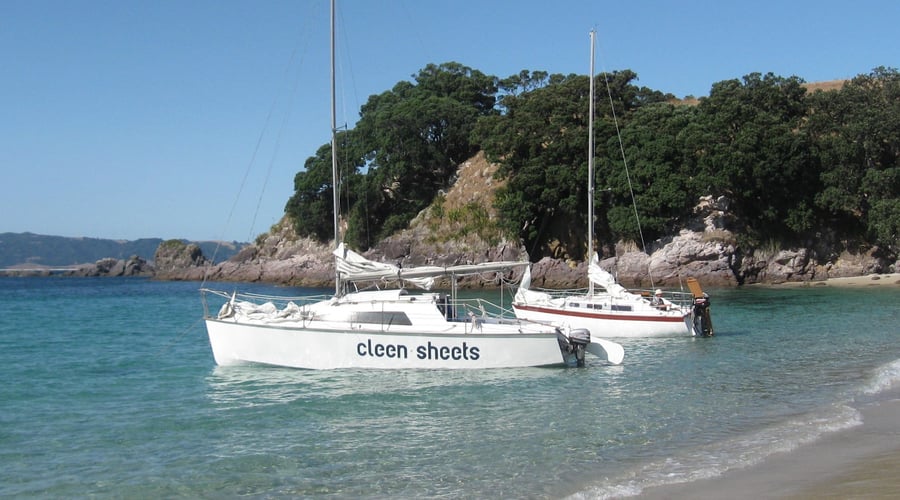 Well, the Summer is over but the Memories remain, and this so- true for the Trailer Yacht Summer-  Coastal- cruise. A seven day trip was planned.  The forecast was first studied, and as there was a bit of a storm heading our way,   we knew there would be a couple of days hiding;  en-route.

Day 1-- saw us with a Westerly; Beam reaching up the coast, “just perfect”, staying close in so we didn’t get bashed around ( that’s trailer yacht talk). Of-coarse the Wind Gods only allow This type of sailing for a period, so just before Opoutere they decided to veer the wind to the North, meaning, a long-tacking procedure for the final sail to Slipper. So- it was into the northern end of  South- bay; there, set up the BBQ, and enjoy a  Happy-hour. Of-coarse, when the Wind Gods saw this type of behaviour they decided to veer the wind back to the West ( which was actually forecasted, but after a few beers one forgot about ). This meant a bumpy night, Bevan staying put and I moved into the middle of the bay. The wind dropped out around 3am , and by next morning was only a zephyr.

Day 2 --With a Light sou-easterly I set off first; around the eastern end of Shoe- island, and set coarse for The Hole in the wall. Bevan, with his spinnaker, was coming up fast as the wind veered first east then nor- east and built to around 10kts,   just perfect for Peach Grove. At a point, Just after Castle Island, I happened to look to Port, and there was Cleen Sheets heading into Mercury Bay; maybe the was a change in plan? So I turned the VHF on and called him. He answered immediately, with a voice a few octaves higher than normal. “Never mind the Hole in the wall, I’ve got a hole in the bottom of my boat I’m taking on water and I’m going to try sailing into Whitianga to make repairs, hopefully, I don’t sink before- hand” ( the PILGRIMAGE had begun). I veered of coarse and followed him in, trying to keep a look out where he exactly was,  ( Luckily the hole was into a  sealed compartment with a removable lid above water-line). By the time I caught up, Bevan had his boat sitting on the sand inside the harbour. We found where the hole was; and the size ;( I had called home let them know where we were and what had happened) Bevan had brought some ply and screws with, in case of such an event but he needed something else so of he went, into the Whitianga wilderness. After a few hours, he suddenly appeared; with the Boat Builders Holy-grail in hand -an XL tube of Silicone (that’s with the 10 instructions inscribed).  Then after we waited for the tide to come partially back in, we headed out into the main channel sat for a-while ( with the knowledge his boat wouldn’t actually sink! ); had the traditional BBQ/ Happy hour; and at full tide headed into the Mangroves on the far side, where Bevan planned, at low tide, (2 am)  to use his main- halyard, fixed to one of the Mangroves; pull the boat over on its side and fix the ply patch to the underside of the bottom. Naturally, I offered to help, but as the previous night was a bit sleepless I didn’t wake and he did it on his own.

Day 3-- High tide was 8.0am, so with the patch secured it, was out of there, and because of the poor- forecast, we decided to head for Whangamata. The wind was Easterly 10-15kts, so a hard beat out of  Mercury Bay in sloppy conditions, then a good run down the coast, past Slipper’s rocky- South bay,  (wondering whether we should stop and pick up a Pet rock with white paint on it) and through the Whangamata entrance, hung a right, and dropped anchor in 1.0m; in soft sand. Bevans patch did hold with only a bucket of holly-water getting in during the days sail, so all good !!

Day 4 -- Was  rain, with  Easterly winds; so we stayed put,  had one more over-night in the same spot;

Day 5  --The wind veered sou’east,(30-40kts), which came straight in the harbour entrance, so, at low tide, we headed up the harbour hung another right, and anchored in  1.m of water, by now the rain had stopped, so we were able to BBQ ashore, amongst the Pohutakawa’s. The forecast was for winds 35-40 kts, slowly decreasing to 15kts by midday, on Thursday,

Day 6 --So the plan was to anchor back near the entrance and leave 8am Thursday morning for home. This evening, as a “special treat” we both, on my boat, motored over to the wharf; that’s the wharf with the two big signs inferring we could only tie up there if we were royalty; found this a bit unnerving so I stayed with the boat to make sure it wasn’t impounded; watched the locals, in a vain attempt to catch fish; while Bevan went off and bought Fish and chips; which we took back to our own beach, (with the picnic-table,)on the other side: So it was beer and fish & chips to finish our pleasant stay in Whangamata harbour

Day 7-- In the morning our 8am departure time was tempered with sou’east gusts still coming through the entrance, so we waited till 10.am before weighing anchor. We agreed, if it was too rough we would come back; My plan-sail out to the 40depth contour on a starboard tack and then on a port tack I should make just south of Whiritoa before having to tack out again; Expecting high winds I had just the storm- jib and a reefed main. On the way out, unbeknown to me, the friendly Harbour- Master had called Bevan over for a chat. ; even ( out of respect I guess) called Bevan by his surname, (that’s the name Bevan had never told him ), and explained next time we come into his Harbour we had better first pay him a visit and he will give us a mooring each ( I guess, that would be, after paying mooring fees and checking our 6m public liability insurance cover ) Bevan said “thanks for the info” and we rushed out into what was an extremely steep-, lumpy,  sea state, (coming in all directions), just outside, and around the corner from the entrance  ( at this point we decided that going back would be suicidal + there was the Harbour Master ). I should really say confused, but that was more my state of mind as, because the wind had actually dropped, I needed to get the reef out of the main quickly, to get the boat moving, as the outboard was semi-useless in the steep waves ;( especially with Hauturu island nearby) But as I,  instead of tensioning the topping lift-  released the main reefing clew, the boom dropped, swung all over the place and of course the cabin hook that fixed the topping lift to at the end of the boom decide to jam- hook itself into the plastic coating of the top hand-rail wire.  It seemed to take forever to work out which rope to pull { learned something here, DON’T have any two ropes the same colour, ((even if it is on special,)); it is possible, that you have to take a reef out, NOT to be ship-wrecked, AND it is a good idea that I have all ropes lead back to the cockpit}, But as all good times must come to an end things settled down and it was on a Port tack we made our way down the coast.                                       At midday I made my daily phone call home, just to see how things were, only to find out Daughter Kelly, because she had heard on the radio, the previous night, about a boat in distress on the Coromandel coast (actually the call was made by some French Woman), had called the police. To report we were sailing down the coast, with a hole in the Boat. The Police then rang Irmgard to get a description, type, etc, but she only knew  “it’s white” and if there was a French Woman involved it was BEST if I was lost at sea!!. They then rang Bernadette who gave them more details but she considered; unless it had been Bevan practicing his “drag Queen act”; it wouldn’t be him (this may be how-come the Harbourmaster knew his name) any- way we saw no aircraft flying low over-head; the yacht in peril was actually way north.  As luck would have it the wind moved more East, and we were able to return with only one tack but just before Karewa the Wind Gods again decided OK Boys you’ve had enough easy sailing and dropped the wind right out. So it was on with the motor, heading straight for the next miracle, namely the Matakana Bank; the sea was a bit lumpy, but with hardly any swell;  and looking ahead I couldn’t see anything breaking so carried on, then suddenly, “without notice”, a wave stood up on my port side, I turned the boat ( sky- ward )into it, just us it broke, luckily “just” behind, I was looking straight down the tube. I glanced at the depth gauge it showed 3m.( it was dead low water oops) I kept motoring out to sea until at least 20m showed, then headed for the entrance and back to the boat ramp. Where Bevan stood.  In conclusion, we agreed that after our trip to the Holly-land;  we had been some-how really blessed, and in a few instances the Sea Gods had taken good care of us. Considering we had this adventure within 120kms of Tauranga, who needs an overseas trip?