A CRUISE TO THE BAY OF ISLANDS - WAITANGI - 1966 and some other MATAATUA memories: Mike Batchelor 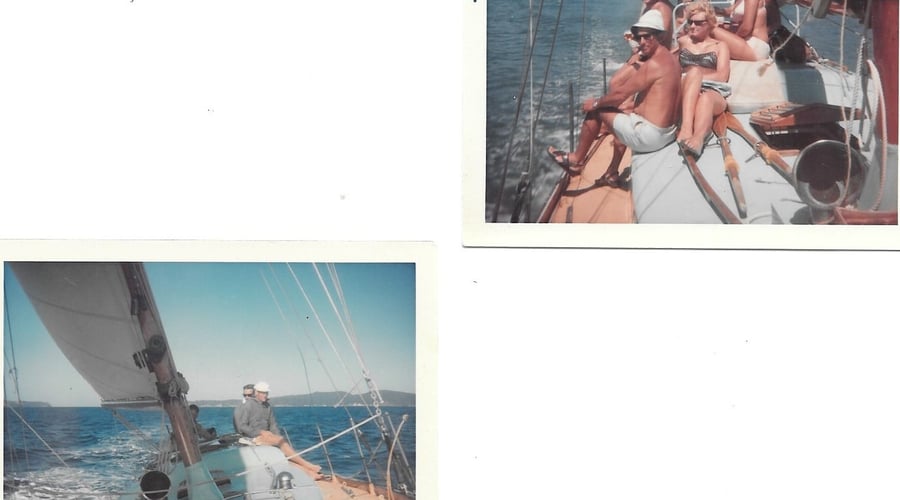 Older members of TYPBC will remember my friend Owen Mackay, a brilliant seaman and navigator. Owen died aged about 51 quite a few years ago.  He taught me how to sail. Apart from his profession as a surveyor, Owen acted as “sailing master” on behalf of Noel Dwan, a farmer from over the hill who was the owner of the 34 foot Stewart designed “Mataatua”.

In early 1966 Owen assembled a crew from amongst his friends; Oona Joustra (Beasley Homes), Dick Wade (electrician at Marshall Electrical Ltd), Keith Dee (Tauranga City Council Deputy City Engineer), Ray Thomas (National Mutual Insurance) Ross Manson (Heatons Transport) Dave Breckon (Breckon Auto Electrical) and myself. Our sailing experience, apart from Owen was minimal. I had never previously sailed on any yacht. Except for Dave and myself all have now passed on. It is the recent death of Ross which has given me the urge to make this sketchy record.

We were bound for the Bay of Islands, aiming to be at Waitangi for the annual celebrations on 6 February.

We set off late in the afternoon from the old yacht club by the railway bridge.  Owen wisely decided that our first leg should be in the nature of a shakedown cruise so we spent the first night anchored in the shelter of Matakana Island near Panepane. Next day in a nice breeze we set off. I have never forgotten the wonderful sensation when the motor was switched off and the yacht moved ahead through the water so smoothly, powerfully and silently – my very first experience of sailing. I was “hooked” immediately.

As far as I can recall, our first anchorage was at Home Bay on Slipper Island. We had on board a massive flywheel for delivery to the farmer there. This was duly delivered and was then followed by a request to help next day with getting in a crop of hay! Well we had nothing else to do. Farmer promised us some crayfish in return. A hard day’s work resulted. Next morning early, there was a knock on the hull and there was the farmer in his dinghy with just one smallish cray! We were not too impressed!

Onward through the Hole in the Wall to a night in the Cove. First of many since for me. Then to Barrier where we had to pick up Dave Breckon who had not been able to get away from his business previously. I remember we hired a taxi to go over to Claris Airport. We must have been a bit late, there was Dave, all alone on a stinking hot afternoon, in the middle of a dusty airfield, sitting glumly on his bag and wondering . . . .

Memory has faded about where we anchored in the Bay of Islands, I think it was at Russell. But we certainly had a great time there and over on the other side at Waitangi. The usual visit from one of the  Royal NZ Navy frigates was accompanied by a group of Wrens (Womens Royal Naval Service) who were only too anxious to shake off their naval companions and to enjoy some civilian company. It was all a lot of fun – ‘nuff said, no tales out of school.

We had a good cruise home, I don’t remember many details. I think we spent one night at Kawau Island and  another at Sou’east Bay, then home. I forthwith gave up cricket and became a “yachtie”. I served my apprenticeship for several seasons on Mataatua.

When Noel Dwan came over from the Waikato he assumed captaincy of Mataatua. He was a fine sailor who like Owen had trans-Tasman and Pacific experience. Noel was of the old-school. I remember an occasion in the Cove when he got so upset over a launch which had not lowered its ensign at sundown, which Noel never failed to do, he rowed over and gave the owner a lecture on flag etiquette. On another occasion, the motor broke down as we approached the Mount entrance. There wasn’t much wind and we were going rather slowly. A freighter was coming out. There was no real danger but Noel insisted on signaling the other vessel “Keep clear we are unable to manoeuvre”.  So up went the appropriate flags on Mataatua’s  starboard shrouds. It was a good laugh and the crew subsequently embroidered the story and embarrassed the skipper by telling him that our signal actually read “Heave to or I shall open fire”. That story was often retold in Mataatua’s saloon. Noel also had a collection of sailors’ weather proverbs. One I remember he often quoted – “Rain before the wind, halyards,sheets and braces mind. Wind before the rain, topsails you may set again”.

I think it was 1973 when Mataatua took part in her second or third race to Suva. This was my first ocean race. The jetties at Westhaven were just about under water with the supplies that were going on board the 30 or so entrants. I could not believe how much liquor (duty free of course) was being loaded on to these racing yachts! There was no deepfreeze on Mataatua. Owen built an enormous plywood box (quickly named “the Coffin”) which fitted into the forepeak. This was filled half with ice and half with our perishables for the race and subsequent cruise. In spite of the weight Mataatua acheived third place in division C. It took 9 days from Auckland to Suva. .

There are many memories from that journey. One dark night Owen tried to stop a running spinnaker halyard and burnt off a lot of the skin on both hands. Fortunately it was near the end of the race and no more sextant work was required. As we approached Suva at night, a large fleet of Russian fishing boats was leaving. So many lights made navigation difficult. We actually had an exciting finish with two other yachts neck and neck in the early morning. During our island-hopping cruise home we enjoyed a pleasant day with the Blakely family on Legend at Malolo Lailai.  At Kandavu Island we were greeted by dozens of children in the most amazing selection of “canoes”, mostly constructed from sheets of corrugated iron (1 paddler 2 bailers). Mataatua was invaded by dozens of these kids and one of the crew inadvisably gave out pieces of fruit cake– what pandemonium that caused! The villagers insisted we go ashore for a tour of the village and a “sing-sing”. A genuine Fiji experience with wonderfully hospitable folk.

Is ocean racing still such fun, I wonder?